Every Memorial Day, black men and women aviators fly in formation over the grave of Bessie Coleman, dropping bouquets of flowers on the grave of the first black woman ever to earn a pilot's license.
Coleman was born in 1892, the twelfth of thirteen children. The family earned their living picking cotton. It was an impoverished existence, and as her siblings reached adulthood two of them left for Chicago, where opportunities were better.

Bessie Coleman followed when she grew up. She trained as a manicurist and got a job at the White Sox Barber Shop, situated on the Stroll,an 8-block section of State Street where black-owned businesses flourished. It was there that she encountered Robert S. Abbott, the editor of the Chicago Defender, a prominent newspaper read widely in the black community.

She developed a desire to become a pilot, inspired by stories of the derring-do of the Wolrd War I flying aces. This was an unthinkable ambition for a black woman at the time. Yet Abbott saw something of the potential in Bessie, and offered her financial help to attend a French flying school. He guessed that she would make great copy, and he was right. On her return from France with her pilot's license, she was greeted by representatives of both the black and white press.

Beautiful and flamboyant, she became an overnight sensation. Barnstorming and stunt flying were all the rage at the time, and no one's exploits were more daring than Coleman's. She became a hero to the black community, who dubbed her "Queen Bess." Her ambition was to start a flight school for black people, to encourage them to follow careers in the promising new field of aviation.

Her career was fraught with peril: many of the barnstorming stunts were daring and dangerous. Coleman also suffered from a lack of sufficient funds and therfore often relied on decrepit and unsafe planes. In California, on February 4, 1922, a plane she was piloting stalled at 300 feet, smashing into the ground. She suffered multiple injuries which landed her in the hospital for three months.

Undaunted, she relocated to Texas and resumed her barnstorming career. She had previously performed in the North, to appreciative white audiences. She now visited venues mainly in the South, where African Americans were her most enthusiastic fans. They opened their homes and hearts to her. Colemans' beauty, skill and daring inspired her African American fans.

According to her niece, "The airplanes she was flying, they were just old things....They weren't worth a darn." The lack of adequate funds did not stop her, however, from planning a flight in Jacksonville, FL. in a ramshackle plane.

Coleman was planning a parachute stunt, so she went up to scout the territory with her mechanic, William Wills, at the controls. Wills lost control of the plane, and Coleman, with neither seat belt nor parachute, was hurled to her death. She was 34 years old.

Her influence, however, lived on. Within a few years William Powell founded the Bessie Coleman Aero Club, both to honor her and to inspire other African Americans to follow her example. Her dream lived on, and still lives on to this day.

Posted by miriam sawyer at 9:47 AM 0 comments 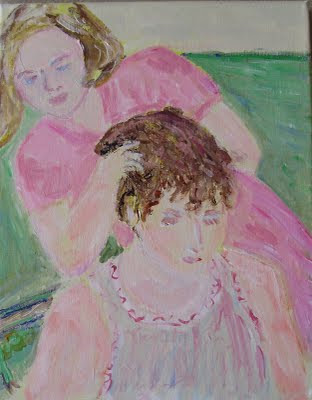 Posted by miriam sawyer at 9:38 AM 0 comments

Trolls need to improve their vocabularies

I moderate comments on my blog and do not permit trolls to express their opinions.  I like my blog to feature only constructive and laudatory comments.  It just seems to go better that way, at least for me.

Here's my advice to my troll(s).  Your vocabulary lacks variety and originality.  Calling someone a fascist is not an unassailable  argument.  Try to learn a new word every day, starting with words of one syllable and working your way up to multisyllabic words.  You might even entertain an original thought from time to time, or is that too much to ask?

Since I ran out of amusing family members, I thought I'd borrow a few from a friend.  This is about some relatives of hers.

The couple had been married over 60 years, but still disagreed about many things, including a big thing--where to live.  He wanted to live in a brownstone in Brooklyn; she wanted to live on a family farm she'd inherited, on a hilltop somewhere in New Hampshire.   The hilltop was inaccessible during a snowstorm, which is just one objection.  It was remote, far from their children and anyone they knew--except one of her sisters, who she wasn't speaking to anyway.

They lived on the farm, but out of spite he would not permit her to install a furnace.  So this old lady, in her eighties, chopped wood and heated her house with  a wood-burning stove.  It didn't seem to do her any harm.

He was dictatorial--a European of the old school.  So he ruled the roost.  He told her what she could do, and what she couldn't do--watch certain television shows, play the radio, or smoke cigarettes.  So he got his way in everything, except living on the farm, of course.

He died at 92, leaving her a widow.  She immediately installed a furnace in the house and took up smoking cigarettes.

I never wanted either one, but trying to read Margaret Thatcher's memoirs in bed led me to reconsider.  One volume easily weighs nine pounds--and there are three.

I haven't the least notion of the pros and cons of these gadgets.  Anyone?

I'm famous for buying gadgets I can't figure out how to use.  Speakerphone. mp-3 player, bluetooth.  So I need something idiotproof.

I feel cheated that Mr Evans Cox--nice name!--is so perfunctory in his attempt to swindle me.  It seems like his heart isn't really in it.


There is a business i will like you to handle with me which will be very
profitable to both of us.
For more information concerning this transaction contact via email.

I feel insulted!  You're not getting my money that easily!  What about that Ugandan business partner, or the funds in the Swiss bank account, which most of my swindlers mention.  And the request for my social security number or bank account, where is that?

Blogger is so hard to use lately.  The most recent headache is the inability to link to another site, which makes blogger almost useless.  There is absolutely no customer service, nobody is minding the store.  We are supposed to solve problems by discussing them on "forums," where we pool our ignorance.

This is not a struggling start-up, folks.  Blogger is owned by Google, a company whose shares are putatively worth a lot of money.  I bet they have a company cafeteria for the employees as well as a gym, and maybe a jogging track.  Would it kill them to sub-contract customer service to a call center in India?

Seen at the nursing home

Mr Charm has a broken leg and is getting it rehabbed at a nursing home.  It's a nice one, it couldn't be nicer, but it's a sad place to visit.  Some of the people are very old, some look like  marionettes who have lost the strings which held them together.  Some are barely conscious.  I should say, barely sentient.  Their relatives visit and try to talk to them, but it's a maximum effort with minimal results.

Yesterday a man brought his father's dog to visit him.  The father said, to the dog:  "You and I used to do everything and go everywhere together"  as he caressed his pet.   It was a poignant moment.

I've been thinking about my father's last illness which ended in his death.  He declined suddenly and his last months were rough, but he was master of his fate until almost the end.

I was informed by a good authority, an Irish guy who grew up in Jersey City, that "rushing the growler" meant sending the kids to the local tavern to bring back a pitcher of beer.  Why growler, I don't know, but the reason for the rush seems obvious--dad was thirsty and wanted his beer ASAP.

Frater libertas puts a slightly different spin on it. 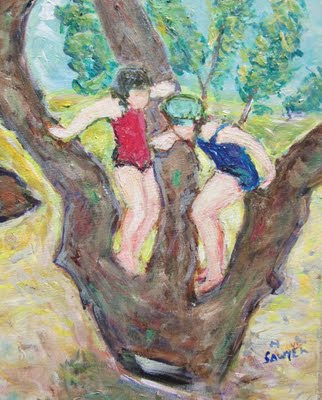 Of pedicures and the government

Medicare pays podiatrists to cut the toenails of seniors.  The last time I looked, the government paid Dr X $65 to cut Mr Charm's toenails.  To reach Dr X, we needed an appointment, and upon arrival, we had to walk down a long hall, Mr Charm had to climb up in a chair, and wait.  And wait.

So I am bypassing the government.  I now take Mr Charm (and myself) to the Vietnamese nail salon.  No appointment.  We park in the handicapped parking spot, Mr Tran comes out with a chair and helps Mr Charm into it.  He helps him climb into the pedicure chair.  Then he washes his feet up to the knees, scrubs the bottoms of his feet and removes any rough skin, and gives his legs a nice, soothing massage.  He also cuts Mr Charm's fingernails.  For this we pay $35, plus tip.

Why doesn't the government pay Mr Tran or his staff to cut toenails?  Dr X could sub-contract the task. Mr Tran could be a paraprofessional, a parapodiatrist, if you like.

Dsitinguishing one terrorist group from another

The Economist has a long disquisition this week in which it analyzes and explains in detail the differences between the various terrorist groups who are plaguing mankind.  Very erudite and impressive, I'm sure.  If you need to know the difference between al Queda in Iraq and other branches of this unholy alliance, you can read the article at the link.

I don't think there is any significant difference among them.  They are all enemies of mankind, thugs and murderers.  And they are not retired murderers and thugs, sated for the time being and content to rest on their laurels.  They are still actively seeking innocents to destroy, as they destroyed a three-month-old Israeli baby in her crib.

Much is made of the fact that Osama bin Laden was or was not given a proper Muslim funeral ceremony.  I think the least important difference between religious groups is the disposition of the dead.  It is a housekeeping decision.  Burn them or bury them, say prayers over them or not, dead bodies must be disposed of for the good of the living.

How do we know Osama is really dead?

Do we need pictures of his dead body?

How do we know Hitler is really dead?

Should I work some more on this one? 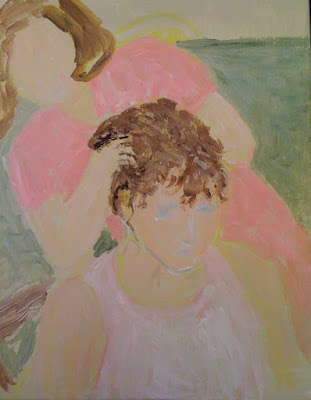 Or sign and frame it? I thought it came out pretty well.