Car trouble in the family

I don't think dad actually found his car missing at the curb when he left the house, but he came close. Mother had a habit of lending his car to one of her brothers when either of them needed it. She didn't discuss this ahead of time with him, as he would only have made a fuss, which would have done him no good because she had determined that whichever of her brothers needed the car needed it more than dad, being as they were doctors. So she informed him around the time he was putting on his coat, preparatory to getting in said car. He was hopping mad, only partly because her brothers were such awful drivers. Uncle Moe was the less dangerous one, as he drove cautiously and timidly, knowing he was not a good driver. Uncle Doc, however, was a terror behind the wheel. He would change lanes by turning on his turn signal and then changing lanes without looking in his mirror to see if there was anyone already in the lane, among other little peculiarities pf his driving style. That was probably why whichever brother who had borrowed the car had taken it to the body shop, having had an accident. But he was a doctor and had patients to visit, not to mention his patients in the hospital he needed to see, and dad could just as well take the bus as he was only a lawyer, like her, and the bus came to a corner only two blocks away and the weather was not that bad. Dad was actually a good driver who enjoyed driving until he died at 99, despite some sourpusses in the family who wanted him to give up his car.

Why is everyone knocking the post office? I personally am totally happy with their service. They actually come to my house--of course Congress is going to put a stop to that! They are planning to cut Saturday service, or maybe only deliver mail 3 to 4 times a week. And Conservatives are constantly knocking the service. Shame on you, Conservatives. If you want to get rid of a government agency, here are a few suggestions: the IRS, the Education Department, the State Department--I could think of more if I had the time. How far would you carry a letter for 50 cents? Or even a dollar? Not bloody far, I'll bet.

Everything in the garden is humming

Every evening, as I get ready for bed, I open the bedroom window, not for the fresh air, but for the sounds in the garden. I'm not a naturalist, so I can't say for certain how the insects in the garden make their indescribable but delicious night music. Maybe they rub their feet together, if they have feet, or maybe they are playing teeny tiny musical instruments. Anyway, the garden is alive with summer sounds and I dread the day that autumn comes and stills their music.

On Sanibel Island, long ago 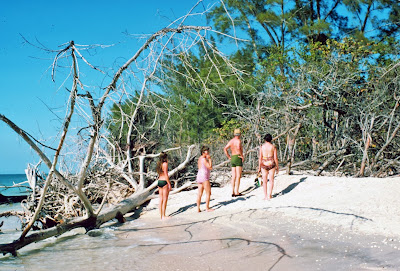 Mr Charm used to call a certain type of clothing "knocking around clothes." These were garments, including shoes,that you would wear around the house, mostly, or for chores like washing the car, weeding the garden, or at most, an emergency trip to Target.>

As far as I can see, these are the only kind of clothes anyone wears nowadays, unless they wear something worse, like going shirtless to mow the lawn with your belly hanging over your belt, or wearing your trousers so low that the bottoms scrape the ground and your underwear shows--and it's not particularly nice underwear, or even necessarily clean. But that last is only the business of your mom, so I won't comment on it.

The aisles of Macy's, Boscov's, Kohl's, Nieman Marcus and Nordstrom are loaded with lovely garments for men, women, and kids. Even the Good Will has lots of nice things. Judging by the looks of the customers, though, nobody is buying them. No wonder we have a recession. The average person around here looks like they last purchased their garments early in the second Bush administration. Not George Herbert Walker Bush, but the other guy, the one who was such a blockhead that he made all foreigners hate and despise us and whose favorite form of exercise was trampling our civil liberties.

But I digress. No one could have obtained size 16 men's pink shoes with grass green laces in 2008. So I guess they are buying some sort of clothes nowadays. To go with the tattoos.

Dear Wells Fargo Collections Department--I really don't know your name, but it's nice to make your acquaintance. How is your day? I hope it is a pleasant one.

Mine has not been so pleasant. As of today, I have received five letters and more robo-calls than I can count from you. As it happens, you are in error, and I electronically forwarded $2,000 to this account from my checking account before your latest series of recriminations. It was your error, not mine. Of course I don't expect an apology; Wells Fargo doesn't believe in such niceties. But it would be a refreshing change if you did not act so high and mighty--as if you were a king in Babylon and I were a Christian slave, so to speak.

Perhaps it would be as well to remember that you are investing the money your customers deposit in your bank. You are not actually doing us a favor by condescending to let us park our money in your bank. Remember also, my dear old Collections Department, that there is 8 percent unemployment out there, and there is an excellent chance that you could join the ranks of the unemployed if you don't treat your customers with respect.

Mr Charm was the son of a single mother and a high school dropout. He was white, and had never done anything criminal, but those are the only differences. He would have had a bleak existence except for one thing: he was drafted. It was during the Korean War.

The army made all the difference. He had a rather quiet two years, drinking beer and eating rich pastries in Austria. In the part of Austria he was in, they spoke German, not Austrian. (Couldn't resist.)

But it wasn't his wartime experience that made the difference. It was the G I Bill of Rights. Next to the Homestead Act, I think it was the most influential piece of legislation Congress has ever passed. It gave thousands of young men a chance at a better life, among them Mr Charm.

Trayvon Martin's life was wasted. At seventeen, he had plenty of time ahead to straighten out his life. Tragically, he never had a chance. I'm guessing his parents gave him no guidance but let him run wild, unlike Dr Ben Carson's mother. They probably gave him no guidance because they never got any. Again, I'm guessing, but I have met dozens like him among my mother's clientele.

On visiting day in any prison you can see the next generation; young mothers, with their children dressed up in Sunday clothes, come to visit their baby daddies.

You can't say these young men and women don't care about their kids; clearly they do. They lack parenting skills, and the schools they attend are pathetic. Since we can't start with the parents, perhaps we could start with the education these kids are getting, an education that suits the teachers'unions just fine.

I don't have an answwer, but it grieves me that a generation of black youth is squandered.

I know at least two people who have had hideous things done to their colon, stomach or other viscera and after an initial weight loss, are just as fat as ever. And then there's Chris Christie. It seems that there are a lot of medical procedures that don't really work but continue to be performed.

Can I make a suggestion? Everyone is always banging on about the fat around your waist and how hazardous it is to your health. It's true that in maturity people tend to get a spare tire around the waist. It happened to me. My weight stayed the same but a small but firm pillow lodged itself just above the belly button and shows every sign of having taken up permanent residence. So why can't the oh-so-brilliant doctors who are removing and remodeling our insides just suction out all the fat? I would be the first person to volunteer for the procedure.