The things I did not learn in school

However, we did learn a lot of songs (in Spanish) from the Spanish Civil War. Also a lot of propaganda from the Soviet Union. And folk songs by Pete Seeger. So my time there was not wasted.

My Keurig coffee maker was not functioning properly, so I looked at their website for a fix. The first step recommended on the website was "Find a paper clip and straighten it out." A paper clip! I seem to remember them from the 20th century, but haven't seen one in years.

The whole procedure outlined on their website reminded me of an incident on the Jackie Gleason show, where Trixie and Alice fixed a car with a bobby pin, to the consternation of their husbands.

I could not find a paper clip but a straight pin luckily did the trick. I poked holes in the thing until it came to its senses and started to dispense coffee.

This painting has been selected 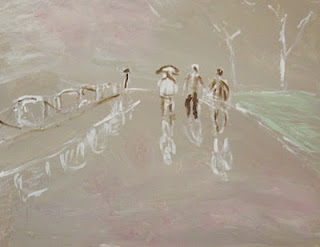 by the Lancaster County Arts association for their upcoming show.

The wrong kind of black man

Liberals are as upset with Clarence Thomas as with George W Bush. The temerity of him, having opinions different from them--it's as upsetting as if a chess piece had made its own move.

A (liberal) young lady who is a relative of mine attended a lecture by Anita Hill. She thought Hill sounded credible.

So what? If all her accusations against Thomas were true, he was not guilty of any crime. He did not force her to go out with him. He did not demote or fire her. The worst he could be accused of is bad taste. As for Hill, testifying against Thomas was her best career move of a lifetime. How else in the world would she be commanding substantial fees for speaking to a group? Is she distinguished as a lawyer or a law professor, has she written notable scholarly articles? Not to my knowledge. Her main achievement in life appears to be as the albatross around the neck of Justice Thomas.

How long has it been since Justice Thomas's confirmation hearing? 20 years or more--look it up if you care to. I know I was much younger then, and so was he, and so was she. If anything ever falls into the category of old news, this is it. Heard anything of Bill Clinton's capers in the White House recently? Neither have I.

Thomas would not stand a chance of confirmation nowadays. The professional liberals are now willing to admit openly how much they loathe a black man whose ideas differ from theirs. They don't need the fig leaf of an Anita Hill's testimony; their rancor would be sufficient to prevent him from being confirmed.

It's so easy to destroy a politician; to make it impossible for anyone to take him seriously ever again. Dan Quayle did himself in when he spelled potato wrongly; he was forever branded as stupid. No brilliant idea or action could save him from the wrath of the evil potatoe. His political career went up in smoke.

Edmund Muskie is an example of the same thing from the other side of the aisle. He had tears in his eyes at some political event and was ever after regarded as a sniveling idiot. And don't forget Michael Dukakis in the tank. No amount of military weaponry could save him after that.

Now it's Chris Christie's turn. The news media tried to go after him for being fat, but the American people were not impressed; they could afford to lose a few pounds themselves and did not hold his excessive avoirdupois against him.  After all, their ancestors had elected William Howard Taft to the Presidency, and he had to have a new bathtub ordered especially for him.

But Christie has finally met his match. He submitted his e-mails and all his correspondence to a committee which found him guiltless, but a lot of good that did him. All his opponents have to do is say "George Washington Bridge" and no-one, including the Pope, can save his political career. The chinek hackers are after him, and will pound on that tea kettle forever.

The pleasure is all mine.

The young man at Whole Foods who helped me put my groceries in my car was certainly happier than the occasion warranted. As he waved away the tip I was trying to give him, he said: "It was lovely to share this moment with you!" Do you think he meant it, or does he just come from California?

Police in Peoria, IL invaded a citizen's home and dragged said citizen off to jail for posting to a Twitter account parodying the Mayor of said town.

That's why the cops need those red light cameras and speed traps: ticketing people individually takes lots of time and personal effort. So does showing up at the scene of an auto accident, which they no longer do either.

I used to believe that the police used the time they saved to sleep in their patrol cars or play games on their computers. Now I know they were involved in worthwhile activities like harassing their employers, the citizens who pay them.

I was an early adopter of E-Z Pass. I must have been using it for twenty years. I was sold on this service with the promise that I would save both time and money. We were promised discounts of 10 percent or more. The promise of time saved has worked out. The money aspect, not so much.

The discount is long gone. Theoretically, time is the only thing saved. To be fair,it is.

E-Z Pass takes money from your credit card, in advance. The last amount they took was $135. But when my credit card was stolen, I had to get a new number, and E Z Pass had no way of knowing that, so they simply stopped accepting my transponder, without explanation.

So I racked up $36 in toll payments due and $98 in "administrative fees." Nice little profit point there.

Another government racket. like red light cameras and speed traps; Take money from the customer's credit card in advance, money which the customer could theoretically invest, then charge him punitive fines without notifying him in advance. Government is in the three card monte business. 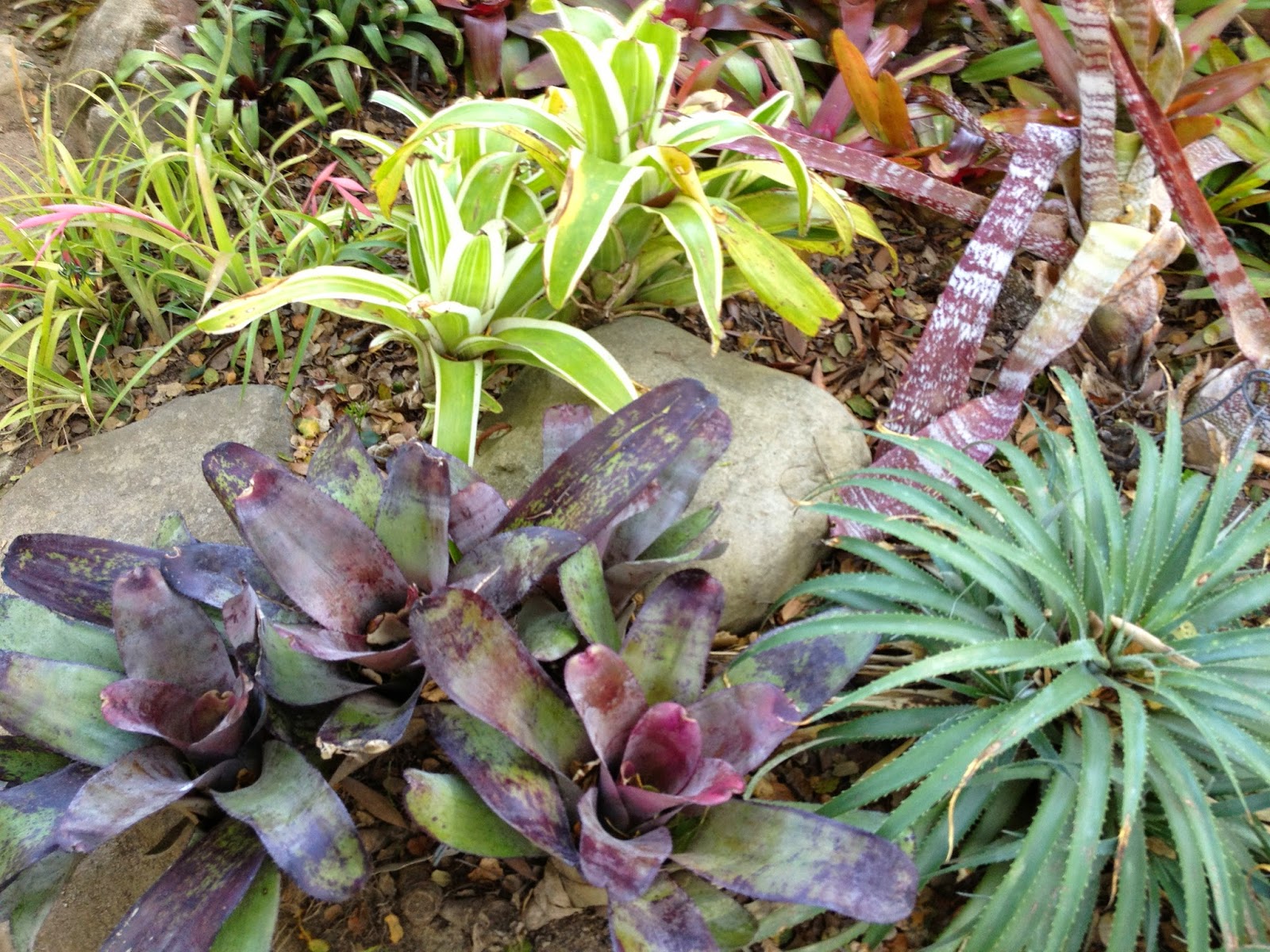 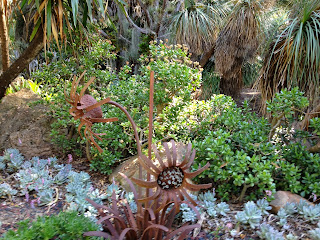 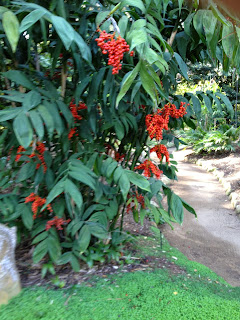 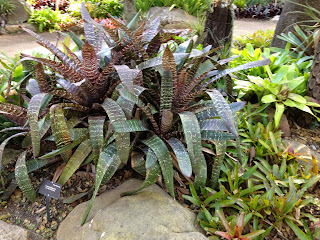 In the Conservatory--not much is blooming outdoors.

It is Spring, and it's starting to show. The trees are different; they are not greening yet, but they are alive in a different way. Expectant! Flowers and shrubs that are yellow are showing their colors. And since this is poetry week, I thought this one was suitable:

I wandered lonely as a cloud

Beside the lake, beneath the trees,

Fluttering and dancing in the breeze.

Of the innumerable authors whose performances are thus treasured up in magnificent obscurity [in a library], most are forgotten, because they never deserved to be remembered, and owed the honours which they once obtained, not to judgment or to genius, to labour or to art, but to the prejudice of faction, the strategems of intrigue, or the servility of adulation. Nothing is more common than to find men, whose works are now totally neglected, mentioned with praises by their contemporaries as the oracles of their age, and the legislators of science." Johnson: Rambler #106 (March 23, 1751)

I not only can't upload pictures to blogger, now I can't upload links. The thing is becoming more dysfunctional by the day.

If I were able to post something, which I am not, I would comment on the attire of generals. It struck me, on observing the general who gave a press statement on the latest shooting at Fort Hood was wearing combat fatigues. Now I am pretty sure that the military has dress uniforms for military officers. Some of them even include swords! What is the use of military officers if they don't get dressed up? Check out the photos of General McArthur wading ashore at the Phillipines. Did he look special or what? And when he accepted the surrender of Japan on a naval vessel, with the emperor wearing top hat and tails, did McArthur let the side down by wearing something more suitable for cleaning out the garage?

Yes, even General Petraeus wore fatigues when testifying before Congress. If that is not an occasion demanding formal wear, what is? Yet the general looked like he was wearing his jammies, albeit with a chest full of medals.

If I ever testify before Congress, which is highly unlikely, I will dress up in a fetching business suit or becoming dress, not in my paint-stained blue jeans. But that's just me.