Some of my neighbors really go overboard decorating their houses for the season--any season. Already two of them have charming Halloween decorations up, and it's not even October. I envy people who go to so much trouble and expense to celebrate these events. Clearly they are light hearted, joyful folks who enjoy every occasion to the max. I wish I were more like that.

Halloween was the holiday Mr Charm liked best, involving as it did candy and little kids, both of which he enjoyed. But dressing up or carving a pumpkin--certainly not.

I looked forward to Christmas when I first got married and wanted to decorate something---- but Mr Charm would have none of it. He loathed Christmas so intensely that the Grinch could have profited by taking his tutorial on the subject. He hated Christmas trees, lights, decorations, angels, Christmas carols on the radio, and all the rest of the collateral damage. Since Christmas is ubiquitous everywhere from Halloween on--stores decorated, feeble-minded songs about Mommy kissing Santa Claus, this was the time of year he hated more. He is the only person I know who longed for the bleak days of January.

About those charter schools...

New York City parents of school children have to choose between deteriorating public schools and charter schools. Once upon a time, parents had another choice. Catholic schools in urban areas served lower class and middle class children, doing a more than adequate job of educating them to be citizens and even to aspire higher. Lately the Catholic Church in its wisdom has closed many of those schools, particularly in urban areas. My impression, which is based on nothing but gut feeling, is that Catholic schools remain only in affluent areas. Urban kids are shit out of luck. Of course, we can all still sent our kids to Sidwell Friends School, where the presidents' children are enrolled. Can't we? Actually no. The Democrats in Congress eliminated a program whereby a few fortunate Washington DC poor kids were allowed to attend private schools on the government dime, even though these programs were popular, with hundreds of parents applying to the program, although only a small number were actually able to participate. Teddy Roosevelt sent his children to Washington DC public schools, back in the day when public school was for everyone. Nowadays they are for the desperate and the choiceless.

No-one wants to flat out inform their friends, one by one, that a marriage is over. But there is a tell which shrewd observer will pick up on 90 percent of the time. Say a woman's birth name was Susan Smith, and she married a man called Andrews a long time ago. She got tired of Mr Andrews, threw him out, and is getting a divorce. But she doesn't want to give up the Andrews surname right away, maybe because they have children. So she calls herself Susan Smith Andrews, or Susan Smith-Andrews.

After a while she doesn't want to be called Andrews any more. She wants a whole new life. Maybe she wants to date, or to meet new people. So she reverts to Susan Smith.

Usually, about this time, she buys a new car. 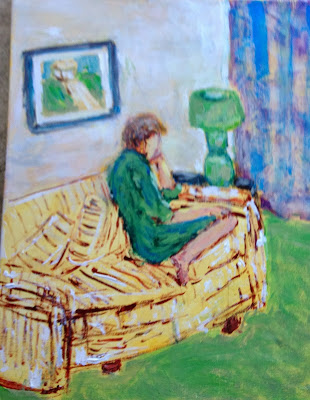 A chat with Amazon

Me:I ordered a car cleaning service from something calling itself Amazon Local. They did not offer the service but billed me. Is this a swindle?

Vinit:Hello Miriam, my name is Vinit I'm sorry to hear about that. I'll be happy to help you today.

Me:So, is it a swindle or not. It doesn't show on my open orders, but they billed me all right.

Vinit:In order to access your account, I need to verify some information. Can you please confirm the complete name, e-mail address, and billing address on your account? Me:Miriam xxxxx

Vinit:There you go, Thank you for providing me the details Miriam. Could you please hold for a minute or two while I look into this for you?

Thank you for being on hold Miriam. I've checked your order history and I couldn't find any order placed for the item which you had mentioned above. In this case, I would request you to contact Amazon local as they will be in a better position to assist you in locating your order.

Me:Well, I wish you'd inform Mastercard. They billed me and I paid it. $89! An expensive lesson.

Vinit:I understand Miriam, but since the order was placed through Amazon local we won't be able to take any action regarding this. I would request you to contact Amazon local on the above given number and they will be able to issue you a refund for the order which you've been charged for.

Me:Don't you stand behind Amazon Local? They are using your name to swindle customers. This means your name is not worth anything.

Vinit:We definitely stand by Amazon Local, Miriam. I'd request contact Local team regarding this issue and we will help.

Me:Why doesn't this appear on my orders? I think it's a swindle and you should be ashamed of yourselves for selling something you don't back up I wonder how many other people fell for this.

Vinit:I'll inform the concerned department as well regarding this, they will take appropriate action on the seller. Orders placed on Amazon local will there on that website, Miriam. As the website works independently, the orders will be present in that account. So I requested to contact them.

I don't really go for the whole healthy food vibe. There are too many cars in the parking lot with "Coexist!" bumper stickers on fancy cars that I could never afford. Also I am a great fancier of genetically modified food. I go to Whole Foods weekly because I like Brown Cow yogurt, the unhealthy, bad-for-you full fat kind with cream on top. Yum! It's probably the most unhealthy thing you can buy in the place.

I needed bread, so with great trepidation I checked out the bread department. The bread department is where the health food fanatics really let themselves go. The selections were awful. None of them were anything my ancestors would have recognized as bread. No challah! And no rye bread! I could understand this if the store were in Utah, but we're talking Philadelphia suburbs here. Anyway, I was too lazy to go elsewhere, so I bought some 7 grain stuff.

But what does it really taste like, you ask? Well, when I was a child in school I used to chew on Faber #2 pencils. This bread tastes sort of like that. Without the lead, of course.

I'm reading the new biography of Margaret Thetcher, and I must admit it's heavy lifting, in more ways than one. For one thing, the author doesn't particularly like Thatcher; he believes she has no interior life. He can't comprehend a somewhat colorless lower middle class woman who, if I'm reading it correctly, was smart but not sensationally so. So, if she did not master any material or pass a test, she redoubled her efforts and slogged through the work required until she had done her absolute best.

A true Englishwoman with a stiff upper lip you could bounce bullets off, she was the diametric opposite of the lip-biting Bill Clinton, who shared his pain in Macy's window for all the world to see. She seems to have been temperamentally a true conservative by nature. Even in her youth, she never entertained liberal views. She appears to have been honest; there were no scandals or corruption in her administration. She made her husband breakfast every day that it was humanly possible to do so, and if her marriage was not happy no-one knew, and they will not find out now. She took her secrets to the grave.

She was a true straight arrow who apparently analyzed the problems of her country with dogged determination until she decided what was the right course, and then followed that course. She was not one to waste her time and energy on wishful thinking but preferred to face facts. The most dramatic event of her administration was the battle with Argentina over the Falklands, which seemed to excite her and revive patriotism among the British.

It's tough to read about such a colorless, and basically boring person, especially after reading about a colorful and flamboyant character like Winston Churchill. The American politician she most resembles is Calvin Coolidge, a man of great reserve from a New England which had not yet embraced the emotional virtues of the Kennedy family. Neither of these made a parade of compassion, or said anything particularly witty or memorable. Both, however, presided over periods of great prosperity.

News, or maybe it's not news at all

While Mr Charm was in the nursing home I missed the evening news, to my great benefit. After he died, I continued the practice of not watching the news. But I can't get away from it any more.

The news has followed me to the gym, and it's all about Syria and what if anything we are going to do. We are not going to send soldiers there, oh dear no! The present plan is that we are going to bomb certain strategic targets, taking care to inform Assad what they are well in advance, so he can pull his assets out. And oh yes, we are going to get Congress to agree to this. Or not. Some time in the not so distant future.

Obama is angry that Bashir al-Assad is killing innocent Syrian civilians with poison gas. It is okay for him to carry on killing them by other means, but friends don't kill friends with poison gas. Assad is probably scared silly by the threatening language and ominous frowns coming from our leader.

My best guess as to the outcome of all this? Since there are still plenty of Syrians left, the evil dictator is probably going to kill some more of them, pour encourage les autres. And Obama is going out in the back yard and eat worms. After he finishes a round of golf.

Obama reminds me of the hero of the book, A Paper Mask. This man, though not a surgeon, is mistaken for one, and it is to his advantage to continue the deception. He can't make a mistake, as he is surrounded by competent people, other doctors and nurses, who will guide him and advise him and keep the patients from harm. But then his support network fails him, and he is revealed as the contemptible fraud he is,