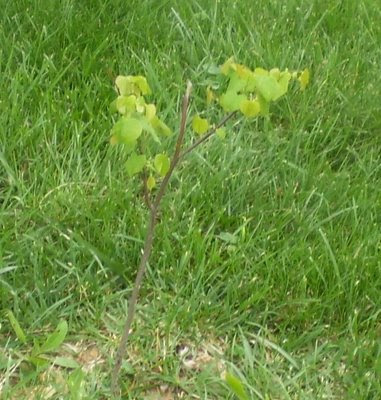 This tree--actually a twig--was a table decoration at a Hadassah dinner a year ago, and I won it. It is a redbud tree, or will be when it grows up. I watered it daily last summer, and it made it through the winter. They say it blossoms in seven years. Well, that's one down and six to go.

It's about 10 inches tall right now. 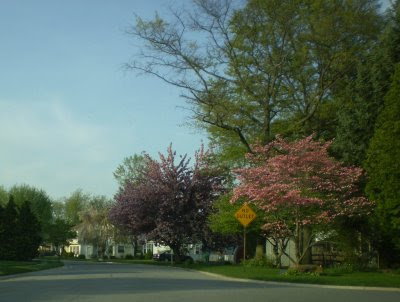 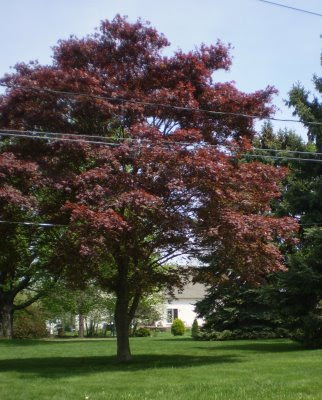 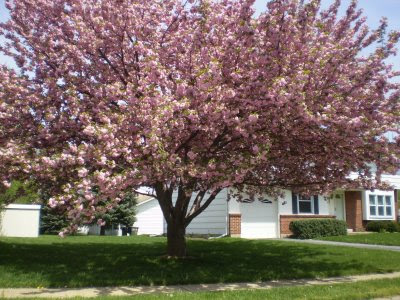 A collection of uninteresting observations:

I'm not having much fun now. Mr Charm is still in rehab and not feeling well today. I'm not afraid of being alone, scared of burglars, or noises in the night. I miss him, though. What does it all mean? Life seems absolutely senseless: "a tale told by an idiot, full of sound and fury, signifying nothing."

Someone has suggested that I actually got the better of Verizon by posting my screed against them. Not so. I've actually spent over $600 in the first third of this year on totally unoutstanding--it would be a stretch to call it mediocre--service. So who's ahead? Who's laughing now?

Every time I have a question about a bill or technical support from anyone, I set aside about an hour to get out of voice mail jail and actually talk to someone. Sometimes that's not enough time.

The people of Wilmington DE are very polite and friendly. Even the panhandlers say please and thank you. Good show, Wilmington!

More than one black person has wished me "a blessed day." It doesn't improve my situation, but it makes me feel better. Good show, black people of Wilmington and environs! That's a nice thing to do.

A letter to Macy's

I am writing to inquire why I must have two Macy’s accounts, one of which does not send me a monthly statement. I pay my Macy’s bill in full every month, yet these other charges do not appear on the bill. But even though they don’t send me a bill, I am supposed to pay the bill they don’t send me.

How am I supposed to know what the charges are, if you don’t send me a statement?

If you people are not smart enough to send me one simple statement for this account, how do you expect to run a business? No wonder the economy is in trouble.

Now I am paying off this Visa account in full, and I want this account closed permanently. I would still like to have a Macy’s account, but if I have to close both of these accounts to have peace of mind, I will be regretfully forced to do so.

I’ve enjoyed getting discounts at Macy’s, but they’re not worth being driven nuts.

The life the environmentals want us to have

"Whatsoever therefore is consequent to a time of Warre, where every man is Enemy to every man; the same is consequent to the time, wherein men live without other security, than what their own strength, and their own invention shall furnish them withall. In such condition, there is no place for Industry; because the fruit thereof is uncertain; and consequently no Culture of the Earth; no Navigation, nor use of the commodities that may be imported by Sea; no commodious Building; no Instruments of moving, and removing such things as require much force; no Knowledge of the face of the Earth; no account of Time; no Arts; no Letters; no Society; and which is worst of all, continuall feare, and danger of violent death; And the life of man, solitary, poore, nasty, brutish, and short."

This one by Neil Kramer --a blogger I actually like--will do.

As for me, I hate the environment. Environmentalists posture because they think they have a self-evidently superior cause. Few of us want to be sen as defenders of pollution, deforestation, global warming, and a host of other bogus concocted evils.

The only environment I care about is my own. So I turn out my electric lights when I am finished using them, because I don't want my environment cluttered with electric bills. I want cheap energy from nuclear power, if that's what works. I want to live a lavish American lifestyle, using plenty of cheap energy to meet my most whimsical desires, not some thirdworldy existence communing with nature, playing with sticks, and using the outdoors as a toilet.

Give me my cell phone, my incandescent light bulbs, my washer and dryer and dishwasher and all the rest of the gadgets which make my life pleasant and convenient. Big gas-guzzlers which burn lots of cheap gasoline! Building projects which use lots of lumber and spread suburban sprawl all over the countryside! Miles and miles of highways covering the countryside! I love them all.

A poem by Robert Burns

As fair art thou, my bonnie lass,
So deep in luve am I:
And I will luve thee still, my dear,
Till a’ the seas gang dry:

Till a’ the seas gang dry, my dear,
And the rocks melt wi’ the sun;
I will love thee still, my dear,
While the sands o’ life shall run.

I have to admit that I avoided Burns's poetry for a long time, because I loathe dialect and loathe even more poets that are celebrated by cults--like Bobbie Burns. But this one is so pretty.

I believe that all of Burns's loves (or luves, if you prefer) were like a red, red rose--every last one of them. And there were many.

DOWN BY THE SALLEY GARDENS

In a field by the river my love and I did stand,
And on my leaning shoulder she laid her snow-white hand.
She bid me take life easy, as the grass grows on the weirs;
But I was young and foolish, and now am full of tears.

Posted by miriam sawyer at 9:18 AM 0 comments

One of my favorite poems

I WANDER'D lonely as a cloud

Beside the lake, beneath the trees,
Fluttering and dancing in the breeze.

Continuous as the stars that shine

And twinkle on the Milky Way,

They stretch'd in never-ending line

Along the margin of a bay:

Ten thousand saw I at a glance,
Tossing their heads in sprightly dance.

The waves beside them danced; but they

Out-did the sparkling waves in glee:

A poet could not but be gay,

In such a jocund company:

I gazed -- and gazed -- but little thought
What wealth the show to me had brought:

For oft, when on my couch I lie

In vacant or in pensive mood,

They flash upon that inward eye

Which is the bliss of solitude;

And then my heart with pleasure fills,
And dances with the daffodils.

When I saw a huge spread of daffodils on a hillside in the Brooklyn Botanic Gardens, I thought of, and appreciated, this poem. My heart actually did leap up with joy, at least for the moment, as prescribed by the poet.

I must admit that they do not flash upon my inward eye in solitude. I am always deflected by thoughts of what's for dinner, or the need to pay some bills.

Still, it's a very suitable poem for National Poetry Day, this April.

Posted by miriam sawyer at 9:03 AM 0 comments

President Obama is quite clear that he is not responsible for the current mess. It's all Bush's fault.

When do we get to blame Obama for everything? How about, erm, some Tuesday in November? 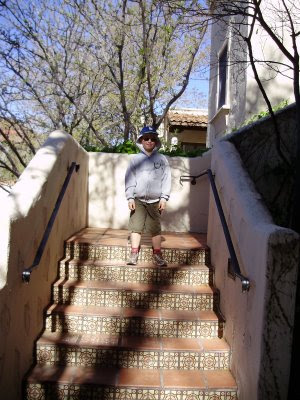 Truly I am not myself, if I let National Poetry Month slip by. So here's a poem, and it's an April sort of poem, too, by Robert Frost:

Nature's first green is gold,
Her hardest hue to hold.
Her early leaf's a flower;
But only so an hour.
Then leaf subsides to leaf.
So Eden sank to grief,
So dawn goes down to day.
Nothing gold can stay.

Vexed in Delaware, California, and Arizona

It's been that kind of week.

It had been cold in Delaware, so I was looking forward to a little California sunshine. Wouldn't you know it, it was colder still in California, with an ominous wind that I'm convinced was just laid on to inconvenience me. It's always warmer in California! Isn't it?

Everything in my suitcase was suddenly unsuitable. I spent four days in my son-in-law's hoodie, and slept in an old robe. The only time I got warm was in the shower. I also lost my cellphone---the one with everybody's number programmed into it. That's like losing your entire social history.

So California was a bit of a washout, weatherwise. (Besides my losing one of my favorite earrings in the hellhole my daughter calls a guestroom.) But we were going to Arizona. Surely it's warm, even uncomfortably hot, in Arizona? Well, it wasn't. Sedona was freezing, and furthermore it has no bookstores, which always makes me suspicious of a place. They didn't even have those books they always have in convenience stores--you know, books with black covers about aliens and vampires, or romance novels. No magazines either, unless you consider publications about trucks magazines.

Sedona was spectacular, but so what? What can you do with scenery, once you've taken its picture? There are also many, many psychics, tarot readers and other various nutcases who must have moved there from California, no doubt seeking a warmer climate.

So we moved on to Scottsdale, obviously a real place--realer than Sedona, at any rate. Scottsdale is either part of Phoenix or not, I couldn't decide. Anyway, one runs into the other, as towns do in New Jersey. It happened to be very cold in Phoenix, or Scottsdale if you prefer. The natives found it refreshing to have a cold spell in a season which is usually hot. Not me. Places should have the proper weather suitable to the season.

All of those places had unsuitable weather, due no doubt to global warmening.

Just got back from Arizona 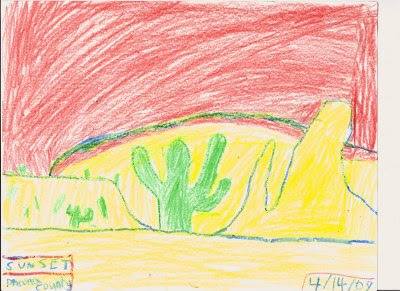 Posted by miriam sawyer at 1:49 AM 6 comments

Every month I attempt to pay their bill, by phone or by credit card. They never credit my account with payment and are constantly sending me disconnection notices. About a week ago I paid their bill over the phone, plus a $3.50 charge for this service. Now I get another disconnection notice!

I would pay this bill over the phone yet again, using another credit card, even though I already paid it, but they seem totally unable to post my payments to my account. So why bother?

I recently called them and enrolled in a bundled program, where I am to receive phone, television, and internet service for $109 a month. This has not been put into operation, even though they agreed to set up the account this way.

These Verizon charges are making my life a living hell.

Can you please, please PLEASE ask them to straighten this out?