I started wondering why I was not getting as many comments as I used to. Maybe I was a better writer a few years ago? So I went through my early work (up to a point) and can report that I haven't gotten any worse--or any better--over the past 5-6 years. My material may have gotten worse, since I ran out of amusing family anecdotes quite a while ago. Will try to think up some more, or maybe I can make some up. I usually write what I feel like writing. I try to check the grammar and spelling, but I am not going to polish my work. Dr Johnson said a man who does not write for money is a fool. I don't mind being a fool, again up to a point, but I refuse to be--what's the inoffensive way to say idiotic? 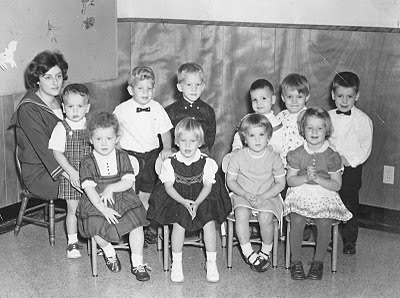 She was second from right in the first row.

My grandson likes to draw planes 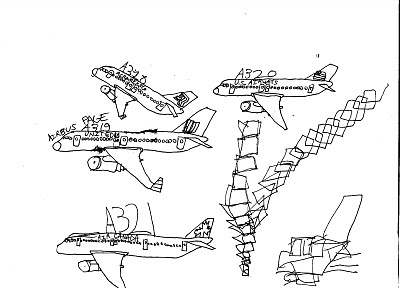 One of the cars cited in this article was the Geo Prizm. However, I know of at least one of these that no longer exists. I was driving it at the time it became extinct. I was preceding across an intersection at about seven miles per hour when I was struck on the driver's side of the hood by a Lexus which was not going very fast but was way bigger than my car. There was a hideous noise and I was spun 180 degrees, to the other side of the street while smoke poured out of the hood, then busily disintegrating and falling in pieces all over the road. I was magically unhurt, but the car! Its mechanical parts had to be swept up with a broom and into a giant dustpan. It was thus I learned that, yes, a car can be too small to be safe to drive. If that car had hit the door on the driver's side, just a few inches from the spot it did hit, I would never have needed another car. Now I drive a four-door Nissan Sentra, thank you for inquiring.

Nothing is easier than spending other people's money. My first demonstration of the wisdom of this old saw occurred in 1976. You may recall that this was the anniversary of the Declaration of Independence--or was it the Constitution--anyway, one of those things. This important event had happened 200 years previously (or according to Ezra Klein, it was 100 years ago. But let's not quibble. It was a long time ago, and none of us were old enough to remember it). Anyway, the library I was managing then was encouraged to apply for funds from the Florida Bicentennial Committee, which we were to raise money to match. We did it, I forget how--maybe it was a bake sale, now illegal in several states because of the trans-fat issue. We raised our share and got the matching funds. Good so far. Then, as 1976 was winding to a close, we were informed that we had two weeks to spend the money, as someone in Washington or Tallahassee wanted to close the books on the Bicentennial. The board members, the mayor and I met in an emergency meeting because we had no idea what to do with the money. We finally came up with a plan. We would furnish a Bicentennial Room in the new library which was to be built shortly. In a lightning swift second meeting, we selected the furnishings of the room down to the color of the drapes and the frame on the picture of George Washington to be put on the wall. It was a piddling sum, but spending it was effortless; none of the group had to look at our personal finances to come up with the money. We could have spend 10 times that, 100 times that, if necessary. My next fun experience was in New Jersey. A bunch of us librarians were drafted to approve proposals for county arts projects. There was a finite sum, and we were to divide it among the candidates. We gave some money to several singing groups and to a group who wanted to paint a mural on a former but now derelict bowling alley in West Milford, NJ. It was fun, and I got an inkling of how much God must have enjoyed making the world and all the people and animals in it.

Depending on the government

I started to question the longtime stability of the Medicare system when I received my Medicare card. The Social Security system, in its wisdom, issued a card printed on cheap cardboard that looked like it might last 6 months. Why couldn't they at least laminate it? The card has begun to fray significantly around the edges, especially because I have to pull it out of my wallet from time to time. Is this a reflection of how long I would have to use it? Would I expire before the card fell apart? My father lived to be 99--did his Medicare card last?

I tried to link to Peggy Noonan's actual column, but it's behind a paywall. She enumerates Obama's virtues: he has a nice family, isn't mean, etc.

Other virtues of our president: He doesn't spit on the floor, eats with a knife and fork, is kind to puppies.

Too much is going on. Yes, folks, I am truly losing it. First Google turned on me, and I finally wrestled it to the ground. The new interface isn't too hot, but I think I've got it down. For now. Wells Fargo continues to puzzle me. I put my mortgage on automatic pay then paid it manually. Twice. Aside from having made three mortgage payments--and two car payments--I went to have fasting blood work and forgot the prescription. Now I have to do it again. I hate leaving my house with no coffee! But what's really bugging me is the medical establishment. First, I have seen three foot specialists and none of them has helped me. The fact that I have pain when walking doesn't seem to concern them at all. But I'm working my way up to the worst of it all. I brought Mr Charm to a surgeon to discuss his having a procedure I read about on the Internet. It is a relatively new procedure, but has been successfully performed for a couple of years. There are learned articles about it in medical journals. If successfully performed, it would improve Mr Charm's quality of life and allow him to live at home, with me, instead of in a nursing home. The doctor's response was like a barbed arrow tinged with a slow-acting poison. He acted as though I were asking him to perform something illegal, although I don't know what modern surgery would consider out of bounds, considering that doctors routinely perform sex-change surgery. The more I thought about it, the more upset I became. He treated me like a criminal. This is still festering in my mind.

I just finished reading "North of Hope" by Jon Hassler. Wonderful! I'm going to read and re-read all of his books. What is it about Minnesota that makes fiction writers so good? Another of my favorites is "Morte d'Urban" by J F Powers. A friend of mine believes that people who live in nice climates--Florida, California--spend too much of their time outdoors and don't develop their brains. Maybe. But I spent eight years living in Upstate New York and didn't develop my brain worth a damn. 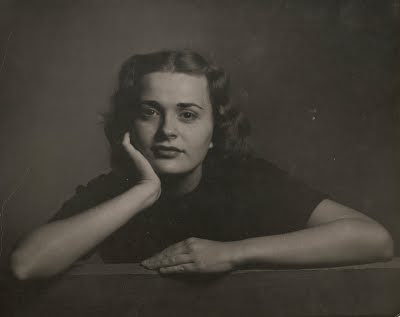 Blogger has changed ...something, and I can now post my sage observations again. So come back! both of my readers.

Posted by miriam sawyer at 9:46 AM 3 comments

A perfect day, with road work

What a beautiful day!  It's bright and sunny and just warm enough.  .There's a little breeze that seems to come from all directions at once, stirring the   trees.  Birds singing.  Even a butterfly showing off.

And of course, four different road work projects at four different places. Every unemployed person in Delaware seems to be out, holding a sign that says either "STOP" or "SLOW."

Trying to post on this blog. Complained to google, but they couldn't get a screenshot. 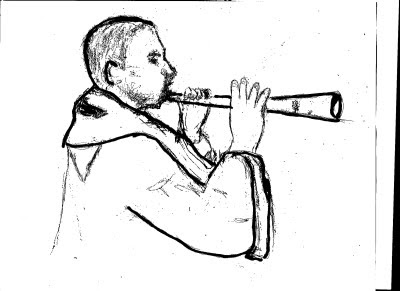 Since this site is non-operational, I am switching my mordant insights to miriamspaintings.blogspot.com