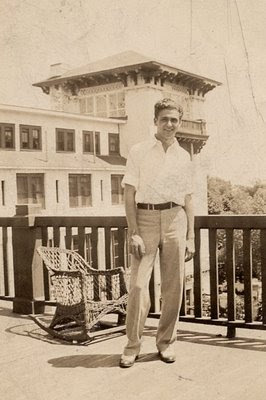 This nice-looking young man (who?), with a confident smile, was photographed on July 25, 1932 (where?)according to the information written on the back if the picture. He looks happy and cheerful, standing there in the sunshine getting his picture taken, before I was born. I wonder who he was and what became of him. Probably he perished in Hitler's war machine, but I hope not.

When bubbe died, my cousin and I tried to bring order to her possessions. Her dresses, shoes and coats were easily given away. Linens, dishes, and silver were divided among us. There were only a few photographs, but one in particular had us scratching our heads. It was a formal group portrait. We decided that they were relatives of my grandfather, probably. But when we showed it to mother, she said, "Oh, those were some people who worked for papa."

Let me reiterate: label your photographs. Some day you and I will be gone, and someone will be staring at our pictures and trying to trace a family connection.

Posted by miriam sawyer at 3:43 PM

Hello Miriam,
Am I blind, or is that southern Californian architecture? Mission style, and strong-looking sunlight. Did some friend or relative head to the West Coast?

Julie: I really don't know. That's what makes it so frustrating.

I'm assuming it's some relative of my grandmother or grandfather on my mother's side, because I have very few pictures of my father's relatives. But he could be the milkman.

Maybe there should be a website for unidentifiable photos.

Could be also some "kurort" (reasort) in Alps...Austria, Switzerland, Bavaria? Especially Bavaria, with that tower. "Mission" style didn't come on an empty place.

A very appealing young man, for sure.

I avoid the box with my old photographs...it'll make me cry. Although, the tears are therapeutic sometimes, that's something I don't need now. With or without the labels.

Tat: I think you are right--it is somewhere in Europe. That would make sense.